Total Cost of EV Conversion from Petrol to Electric Scooter 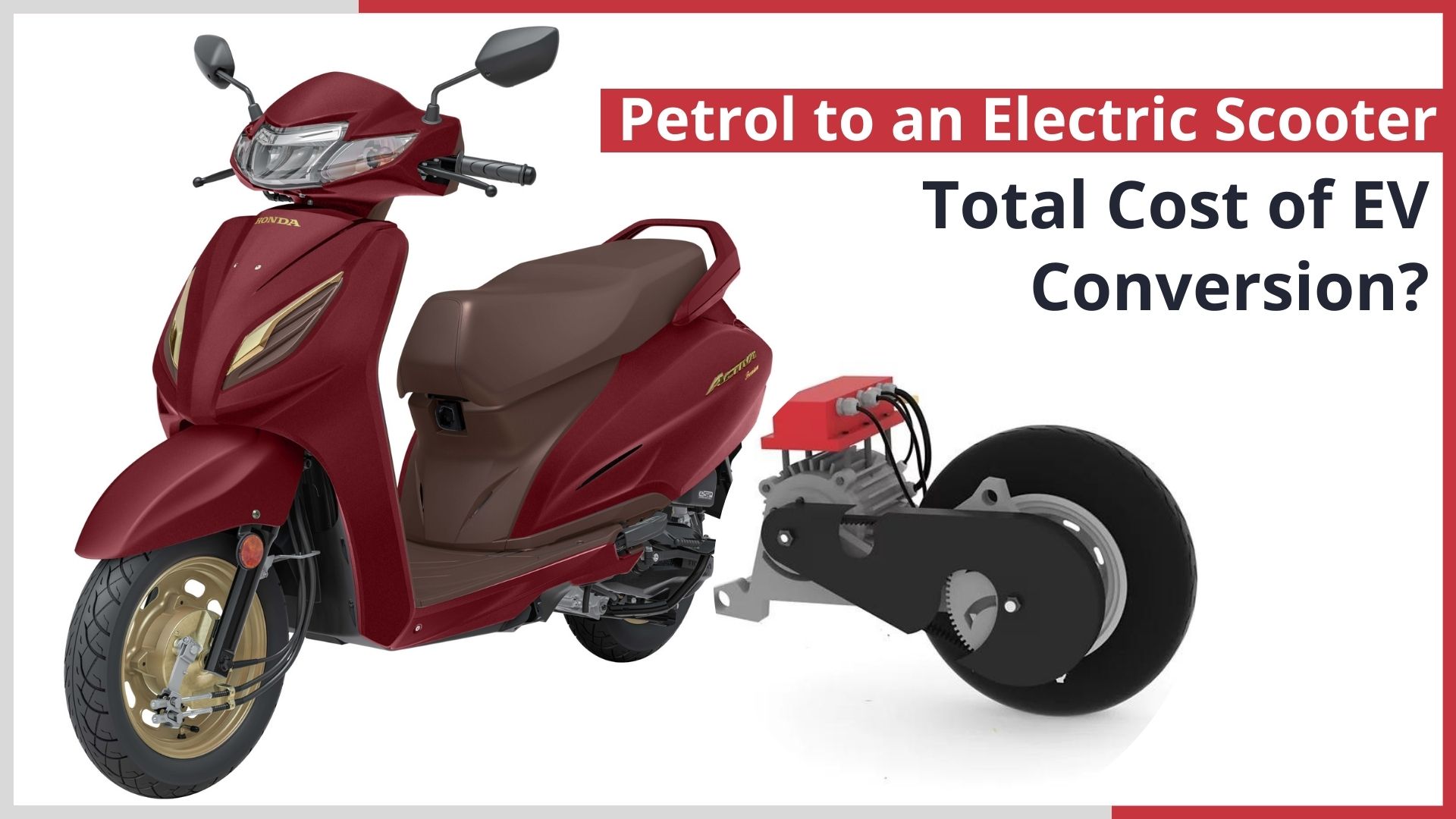 People in every corner of the world have started adopting electric vehicles. There are many reasons behind this, the main one being the rising prices of petrol/diesel worldwide. Since these fuels are in limited quantities on Earth, their increasing exploitation has become a matter of concern.

Due to this, their prices are also increasing and people have started turning to electric vehicles.

But there is also a significant problem with buying electric vehicles, their high cost. Electric vehicles are expensive compared to petrol diesel vehicles, so still, people from middle-class families cannot afford them.

If you also want to ride an electric scooter, and don’t want to spend huge upfront costs on EVs, then the better solution is EV conversion. Yes converting your existing petrol scooter to an electric scooter can be an excellent solution for saving a lot.

Today we will tell you how you can convert your petrol scooter into an electric scooter at a very low cost. Which parts are needed in this? What is its process and how much can it cost, we will discuss this.

Some of the best companies for Electric two-wheeler conversion are Bounce, Zuink, and Gogo A1.

These companies retrofit of the electric kit in the scooter by changing the engine. With this, your petrol scooter will be completely transformed into an electric scooter.

To convert your petrol scooter into an electric scooter you have to replace some parts of it. Some new parts have to be added and some have to be removed. Let’s talk about those parts-

The most important part of the EV conversion is the electric motor, which is replaced by the scooter’s engine. In this, it is better to use a hub motor as it is the easiest method of retrofitting an electric scooter.

Talking about the price of the motor, usually you get a BLDC hub motor for a price of up to 5 thousand. You should use only a heavy motor in this so that it can run smoothly even with the weight.

The second biggest part of retrofitting an electric scooter is adding a battery pack. Electric scooters use a lithium-ion battery or it can be a lead acid battery.

For a general user, we would recommend a 16 AH Lithium Ion battery. With this battery, you get a range of up to 40 km/charge.

Apart from this, a range of 120 to 140 km/charge can be achieved by applying double or triple battery packs according to the convenience of the user. Its single battery (1kwh) costs you 10 to 12 thousand rupees.

Apart from this, if a double battery is used according to the need of the user, then it will cost you extra.

The controller is the third most important part, controlling both the battery and motor of the scooter. You will get it in the market for a price of around 3 to 4 thousand.

Apart from this, some other small parts are also needed like a speedometer, power plug, throttle, MCD (Protection Device), temperature sensor, etc.

Normally you get RTO approved retrofit electric motor kit for 15 to 20 thousand rupees.

Apart from this, you will have to spend the lower battery separately which is 10-12 thousand rupees. So from this, it can be estimated that you can convert your petrol scooter to electric at a cost of 25 to 30 thousand. This may cost you extra to add an additional battery pack.